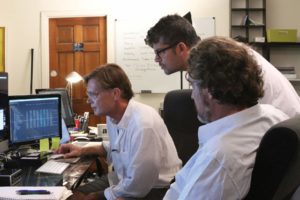 1) Though this film focuses on a scientific fraud committed by a U.S. Government agency, and the statistics presented are U.S.-centric, this story is an international one. Virtually every developed nation in the world is seeing a dramatic increase in the rate of autism.

2) Funding for the film – Virtually every dollar in this film to date has been donated by a handful of brave parents and philanthropists.

3) Paying it forward – 10% of all producers’ profits, will go to The Autism Trust, a planned community for autistic adults and families.

4) Assembling the Production Team – One of the most interesting stories about this film is the unlikely team that came together to make it. For six years the Producer, Del Bigtree, was an Emmy Award winning producer for the nationally syndicated medical talk show “The Doctors.” After being introduced to Andrew Wakefield, arguably the most controversial entity in medicine, and being presented with the documents in Andrew’s possession that laid out the fraud committed at the Centers For Disease Control and Prevention (CDC), Del committed what looked like career suicide. He left his job and career to work side by side with Andrew on this explosive documentary. Del’s professional network brought in a team of editors from an award-winning primetime television show, animators, as well as music composer Francesco Luipca (Thin Red Line).

6) The audio recording of Dr. William Thompson – As stated at the beginning of the film, Brian Hooker recorded William Thompson without his knowledge. Many people will have the perception that taping someone without their knowledge or permission in the U.S. is illegal. However, Brian Hooker, who lives in Redding, California, drove north for two hours to cross the Oregon state border before calling Thompson. He repeated the journey four times recording only those conversations, although they had over 30 phone discussion between them. Why? Because Oregon is a “one party consent” state. In a one party consent state, only one party on the call need consent to the recording of the call provided that the second party is also in a one party consent state. Transcripts from the four taped conversations have been released in book form, by Kevin Barry Esq., himself the father of a child with autism and former president of Generation Rescue.

7) Hear This Well – The “Hear This Well” campaign started in response to a CNN correspondent, Elizabeth Cohen, who said on air in 2015: “Vaccines are safe. Autism is not a side effect of vaccines, or to say it another way because some people don’t hear this well, vaccines do not cause autism.” In response to Cohen’s statement that vaccines do not cause autism, parents upload videos to YouTube where they share stories of how autism has affected their families and share their belief that their children’s autism or other health problems are the result of vaccine injury. They then instruct Elizabeth Cohen and others to “hear this well.” Thanks to the 200+ families who have shared their stories (which can be found here) and have granted the production permission to use their videos in the film.

8) The Vaccine Court Animation features the voice of Rob Schneider (“Deuce Bigalow” “Hot Chick”) and was produced and provided through the courtesy of the Canary Party.