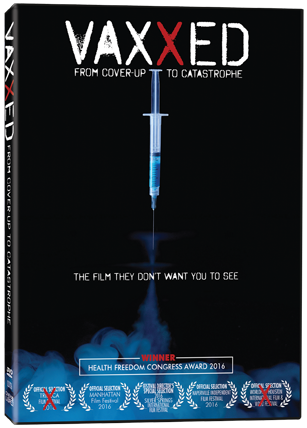 The Standard DVD is Region 1, meaning that it will only play on devices intended for the USA, US Territories, and Canada.

The International PAL format DVD is Region Free and should play on all devices globally, except in the US.

International orders (including Mexico and Canada) will take longer since they require international shipping, around 1 to 2 weeks depending on customs. For questions regarding your order please contact us at dvd@vaxxedthemovie.com or call 818-588-3033
(9:30am to 5:30pm PST M-F)

Special Features – One Hour of Never Before Seen Bonus Material

YOUR ORDER WILL BE SHIPPED WITHIN 48 HOURS.

For a limited time, 10-packs of DVDs can be ordered for only $124.75 with free international shipping! Get this special bulk discount to send a copy to your  legislature, educators, and medical community. Plus, the DVDs feature spanish subtitles for your spanish-speaking friends and family!

The Vaxxed DVD is available and ships to all territories, including the United States, Canada, and internationally.  We are negotiating with international distribution partners to release Vaxxed in more languages.  Learn More

The scientist, Dr. William Thompson, confessed that the CDC had omitted crucial data in their final report that revealed a causal relationship between the MMR vaccine and autism.

Over several months, Dr. Hooker records the phone calls made to him by Dr. Thompson who provides the confidential data destroyed by his colleagues at the CDC.