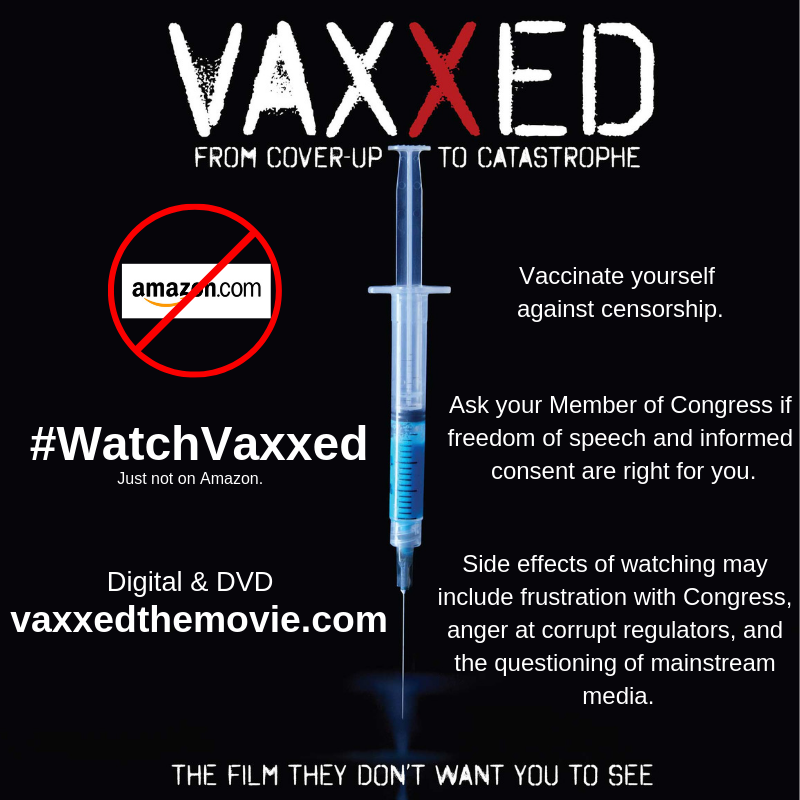 VAXXED IS PULLED FROM AMAZON

The pro-pharma folk have won a significant victory today against safer vaccines and health freedom. Following Rep. Adam Schiff’s letter to Google and Facebook, Pinterest responded by removing searches about safer vaccines and vaccine injury so those who are questioning vaccines or want to learn more about the risks can no longer find this information and are limiting advertising possibilities.  YouTube also made the decision to limit the monetization of vaccine-questioning content on their platform.

Rep. Schiff sent a second letter to Amazon this morning, which resulted in Vaxxed being removed from Amazon Video, including Prime and streaming. It was available to stream in the U.S., UK, Canada and Australia and had been readily available since 2016 with Amazon earning healthy margins, especially on Prime.

Here’s the rationale Amazon provided for why it pulled Vaxxed:

Availability Issue: We are always listening to customer feedback and iterating on their behalf. During a quality assurance review, we found that the following title contains content that doesn’t meet our customer content quality expectations. As a result, all offers (“Included with Prime”, Buy, and Rent) have been removed. We will not be accepting resubmission of the impacted titles. This will not impact any royalties accrued through the date it was removed and will follow standard payment timelines.

(To note: The film stills seem to be available on DVD for now with over 3900 reviews and almost ALL of them are 5 stars.)

Also to note: if you contact Amazon customer service, they will reply that it was the “content provider” who made this decision. That is not accurate.

It’s important to note that Vaxxed can still be streamed in over 250 territories via Vimeo here.

If you had ordered the film via Amazon and it is in your queue, you will have to ask them directly for a refund via the orders module.

If you watch this CNN report, you’ll see what Facebook – one of our key communication platforms – intends to do.

Here are some ways you help fight this act of blatant censorship and attempts to silence our community:

Purchasing Vaxxed is the greatest method of support for the film, and protest of this censorship. Please do not pirate the film – this only harms our efforts.

Protest Amazon
Let Amazon know that you want Vaxxed back up! Tell them via their social media, and send them a complaint:

And should you choose, #BoycottAmazon! If you contact Amazon customer service, you might be told that the “content provider” (as in us, the distributor), have pulled the film voluntarily. This is not true and likely because the customer service people are uninformed, not because it is the truth. We did not pull the film.

Here is where Adam Schiff can be reached via Facebook: https://www.facebook.com/RepAdamSchiff

Here is a post he did recently about the actions he took to get Vaxxed removed from social media and Amazon. Please go to this post directly and let him know that censorship will not be tolerated. In order to protest his actions, whenever he makes a new Facebook post, drop the Vaxxed trailer in the comments section. Here is a link to the trailer.

Here are other ways you can reach Adam Schiff to let him know that his actions are un-American and that censorship of any kind will not be tolerated:

Twitter: @RepAdamSchiff
Suggested copy: Why do you oppose the Nuremberg Code (1947) of informed consent, and want to censor books & films by doctors who question the safety of multi-billion-dollar pharmaceutical products? Doctors and citizens have a right to #QuestionPharma #ProtectHealthFreedom #WatchVaxxed www.vaxxedthemovie.com

Write him a letter. Share your story, and explain why you believe Vaxxed should not be censored. You can be firm, but please be civil and polite.  Here are the some talking points you can include in your letter:

Here is where you can send the letter:

Another documentary, INJECTING ALUMINUM, which questions the safety of the aluminum in the adjuvant, also released by the same distributor as Vaxxed and mentioned in the Wired UK article and in subsequent CNN coverage, was also removed from Amazon Video although it remains up on DVD. Ironically, it is still listed as an “Amazon Choice” on DVD. (Learn more here).